Steer Clear Of These 7 Traps For IRA Owners

The rules for IRAs offer plenty of opportunities to save a tidy nest egg through contributions directly to the accounts as well as rollovers from 401(k)s or other employer-sponsored retirement plans. Funds in the accounts normally compound tax-deferred while you’re working and into the early years of your retirement. You won’t owe a penny of federal income tax until you take money out of your IRA. 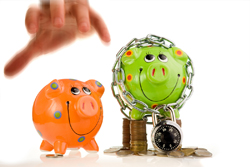 But if you don’t fully understand those rules for IRAs you could run into trouble. Consider these seven common tax traps:


1. You withdraw money from your IRA too early. Because IRAs are meant to be used for retirement saving, the government will penalize you for taking withdrawals prematurely. Generally, a 10% tax penalty applies to distributions made before you reach age 59½, although there are some exceptions—your heirs won’t owe the penalty on withdrawals if you die before you reach that age, and you also are allowed to take “substantially equal periodic payments” over several years without penalty. But when you do have to pay the penalty, 10% is added to the regular income tax you owe on the withdrawal.


2. You fail to withdraw money from your IRA. But you’re also not allowed to keep money in an IRA indefinitely. The IRS requires you to begin taking required minimum distributions (RMDs) in the year after you reach age 70½. Then you must take an RMD, based on a life expectancy table and the amount in your account at the end of the prior year, for each succeeding year. Failure to take RMDs results in a penalty equal to 50% of the amount that should have been withdrawn.


3. You don’t complete a rollover in time. The tax law allows you 60 days from the time you receive a distribution from a tax-deferred retirement plan to redeposit the funds in an IRA. This rollover is exempt from federal income tax. That’s generally true whether the rollover comes from an employer plan or from another IRA. However, if you don’t redeposit the same amount as you withdrew within 60 days, the transfer is treated as a taxable distribution.


4. You double up on RMDs in the first year. Technically, you don’t have to take your first RMD until April 1 of the year following the year in which you turn age 70½. However, if you wait until then to withdraw that first year’s RMD, you still must take an RMD for the second year as well. What’s more, doubling up on RMDs in one year may increase your overall tax by pushing you into a higher tax bracket. You might end up owing less in taxes if you take the first distribution during the year you turn 70½.

5. You roll over to another IRA more than once a year. Although rollovers aren’t taxed as long as they’re completed within 60 days, you can make an IRA-to-IRA transfer only once during a 12-month period. Violation of this “once-in-a-year rule” results in a taxable transfer. Previously, the IRS treated this rule as applying separately to each IRA you own. However, because of a recent Tax Court case and a subsequent change in IRS rules, the once-a-year rule now applies to all IRAs. So if you make a transfer between any of your accounts, you won’t be able to make another one until a year has passed.

6. You make the wrong choice for a spousal rollover. Spouses who inherit an IRA may elect to treat the IRA as their own, remain as a beneficiary of the deceased spouse’s IRA, or “disclaim” the IRA so that it goes to a contingent beneficiary. This complex decision could have unintended tax consequences. For instance, if you inherit an IRA, you are under age 59½, and you need to make a withdrawal, designating the IRA as your own could result in a 10% tax penalty.


7. You ignore estate tax ramifications. IRA owners sometimes forget the estate tax implications of inherited IRAs. Because IRA assets will be included in your taxable estate, the person you designate as beneficiary can make a difference. Spouses normally can inherit an unlimited amount without owing estate taxes, but that money could be taxed when the second spouse dies. It pays to consider all of the possible implications when you work with your advisors to devise an estate plan that fits your situation.


By paying close attention to the rules, and sidestepping these traps, you can derive the maximize benefits from your IRAs.